Warhol and History of Arts

Home > Warhol and History of Arts

Humans are dissolutely linked with imitation: a human being only becomes human at all by imitating other human beings. Perhaps, I am now looking at an art form which has a considerable history going back over 600 years. Durga Kainthola paintings reminds me of my wonder years i.e. adolescence. My first experience with watercolours back then, made me curious enough to perform a series of experiments with colours. Sometimes, I use to rewet and the paint becomes infused with its paper support. Knowingly or unknowingly — we all at some time or the other were subconsciously aware of this style of painting. Fortunately, only few people know of its absolute existence today and Ms. Kainthola happens to be one of them.

It’s time to get back from feeling nostalgic to the moment as I was going through the works of Ms. Kainthola’s Gouache on Paper under the series Warhol and The History of Art. Andy Warhol was a leading figure in the visual art movement known as pop art back in the 20th century. His works explore the relationship between artistic expression, celebrity culture, and advertising that flourished by the 1960s. However, there is a mix of past and present in her works, as she takes inspirations from historical events and stories in her paintings. It also takes cues from different socio-political events happening around. Her artwork stages a stimulating, complex play between art, the symbolic and the immeasurable.

Imitation is the sincerest form of flattery. However, I must say that it is not just pure imitation. Ms. Kainthola went a step further in trying to experiment with the truth of the human mind by creating and showcasing what people would secretly desire. It is quite tricky to segment between the mundane desires and the genuine quest for art as it reads in one of her works.”Although he holds his brush and palette in his hands, I know his heart is always me.” A learned individual once said that by three methods we may learn wisdom: first by reflection, which is noblest; second, by imitation, which is easiest; and third by experience which is the bitterest. I can say that the work of Durga Kaithola manifests all the three methods of wisdom — like the three musketeers. 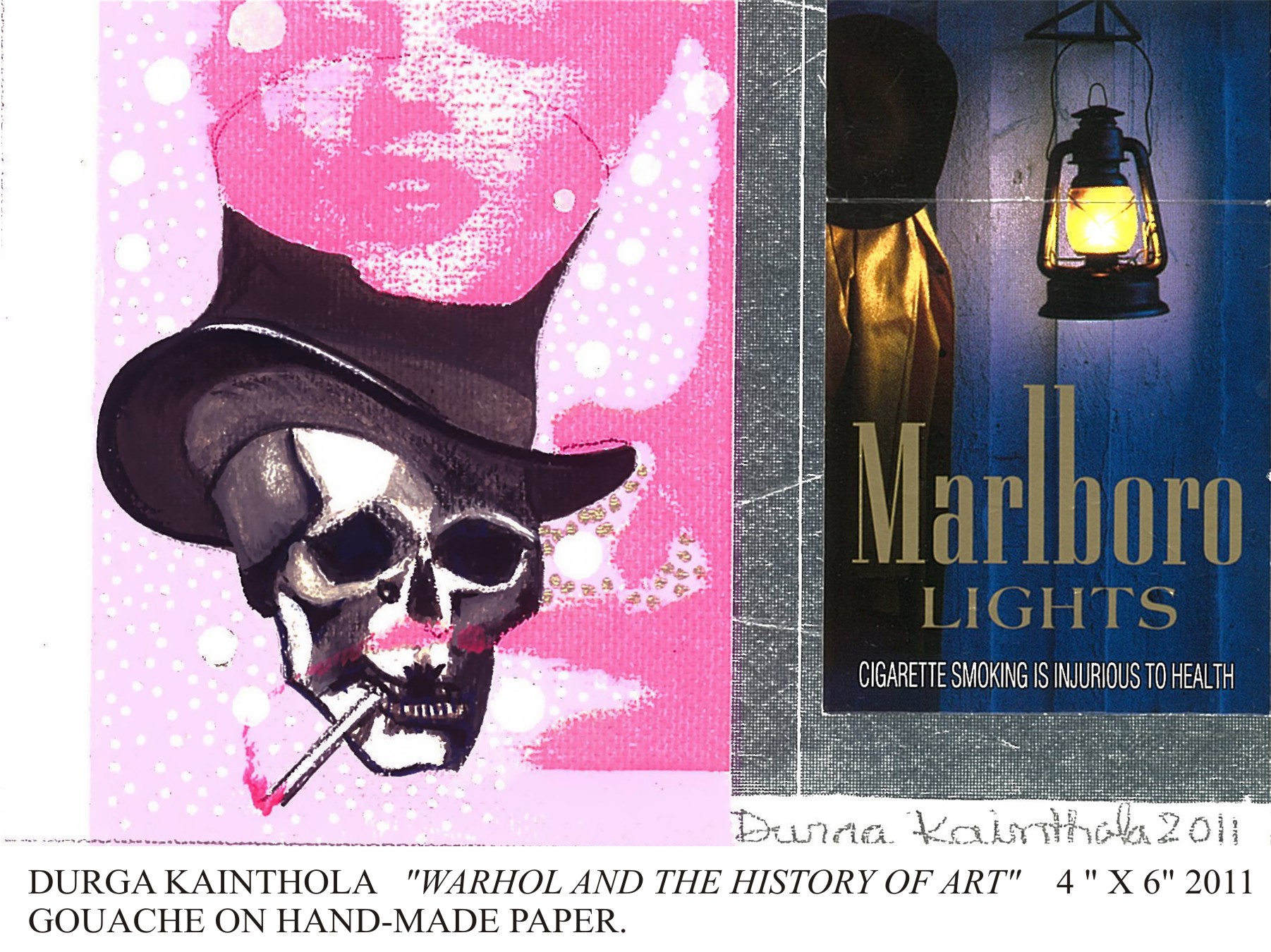 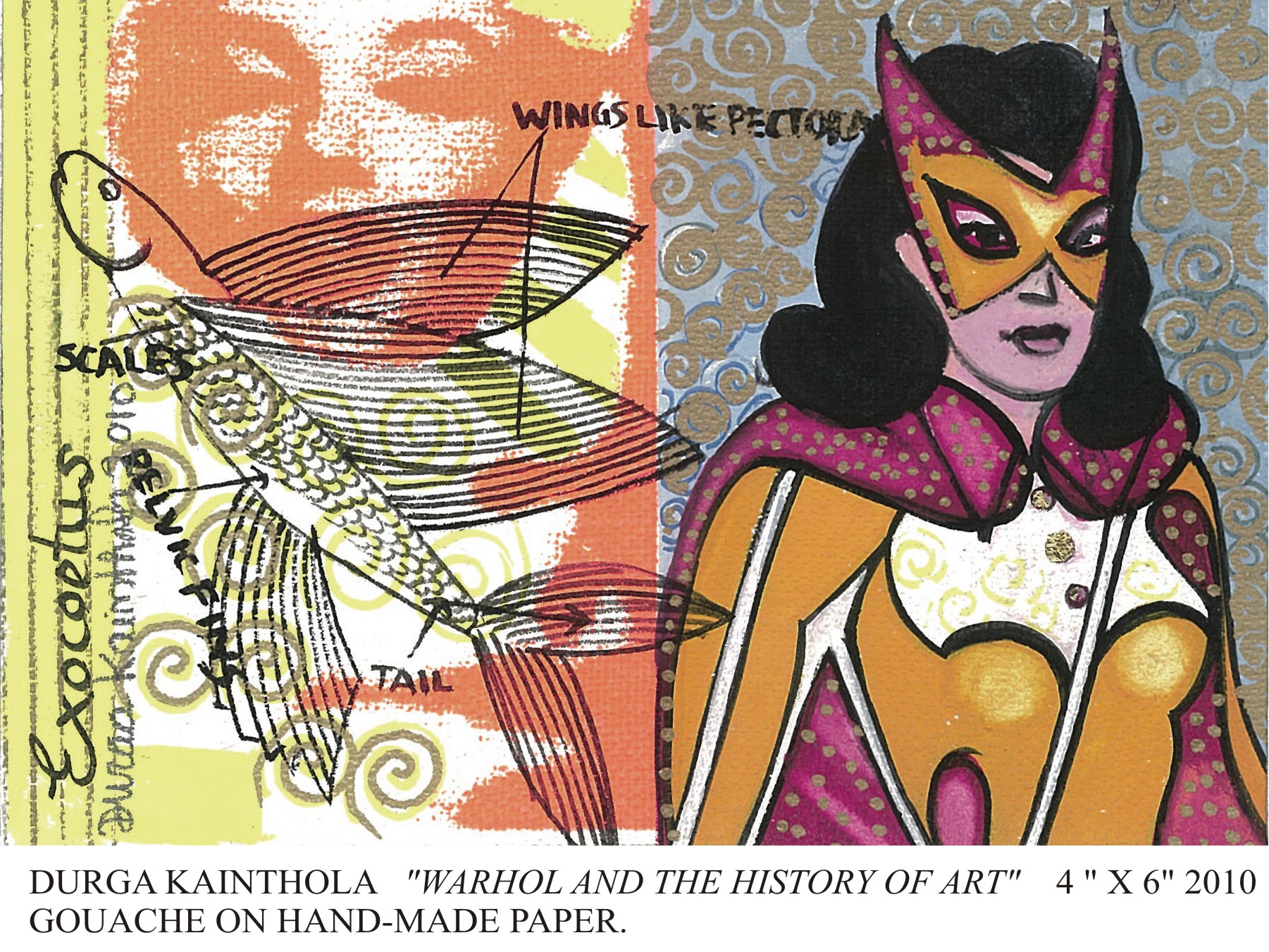 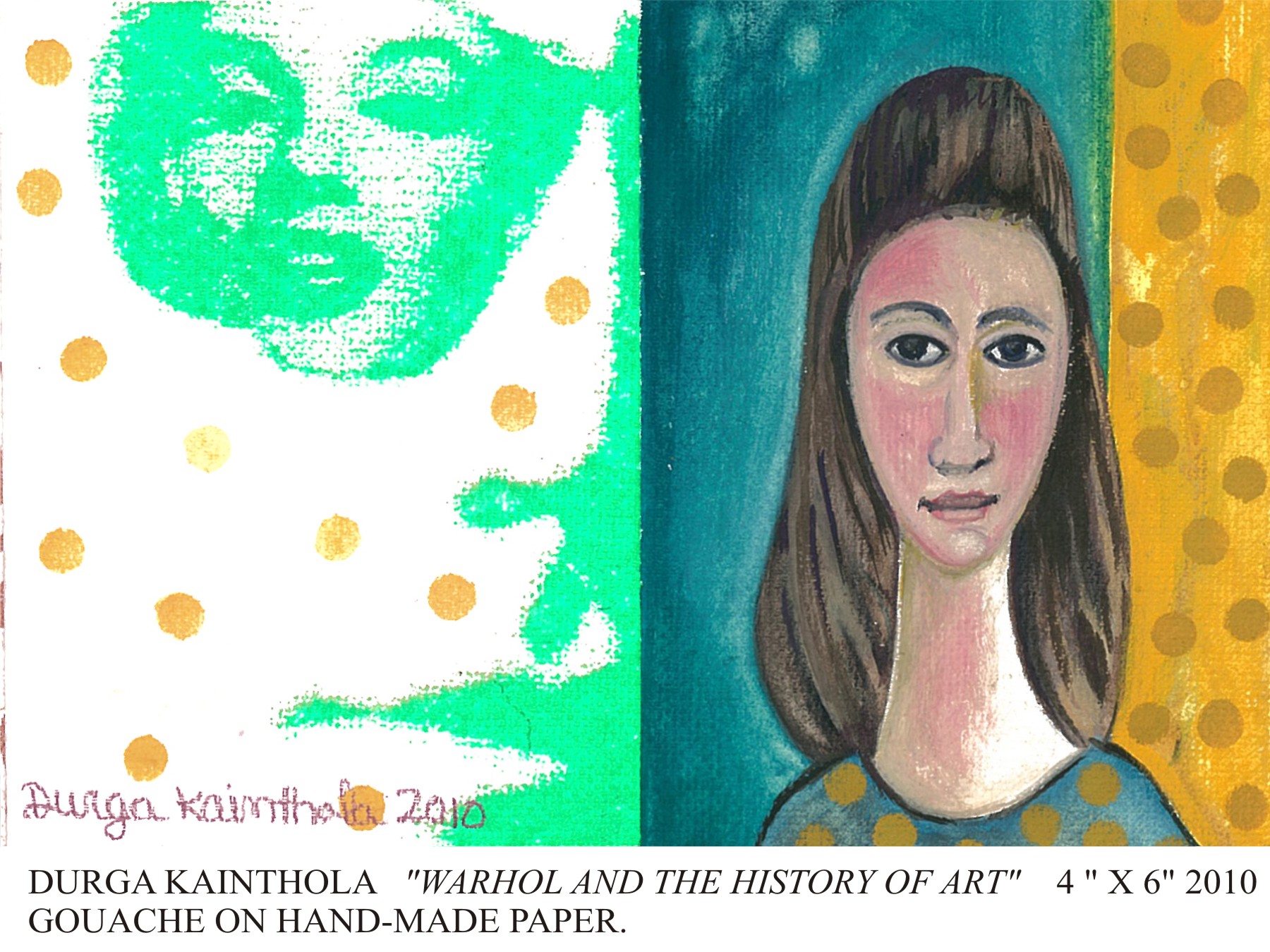 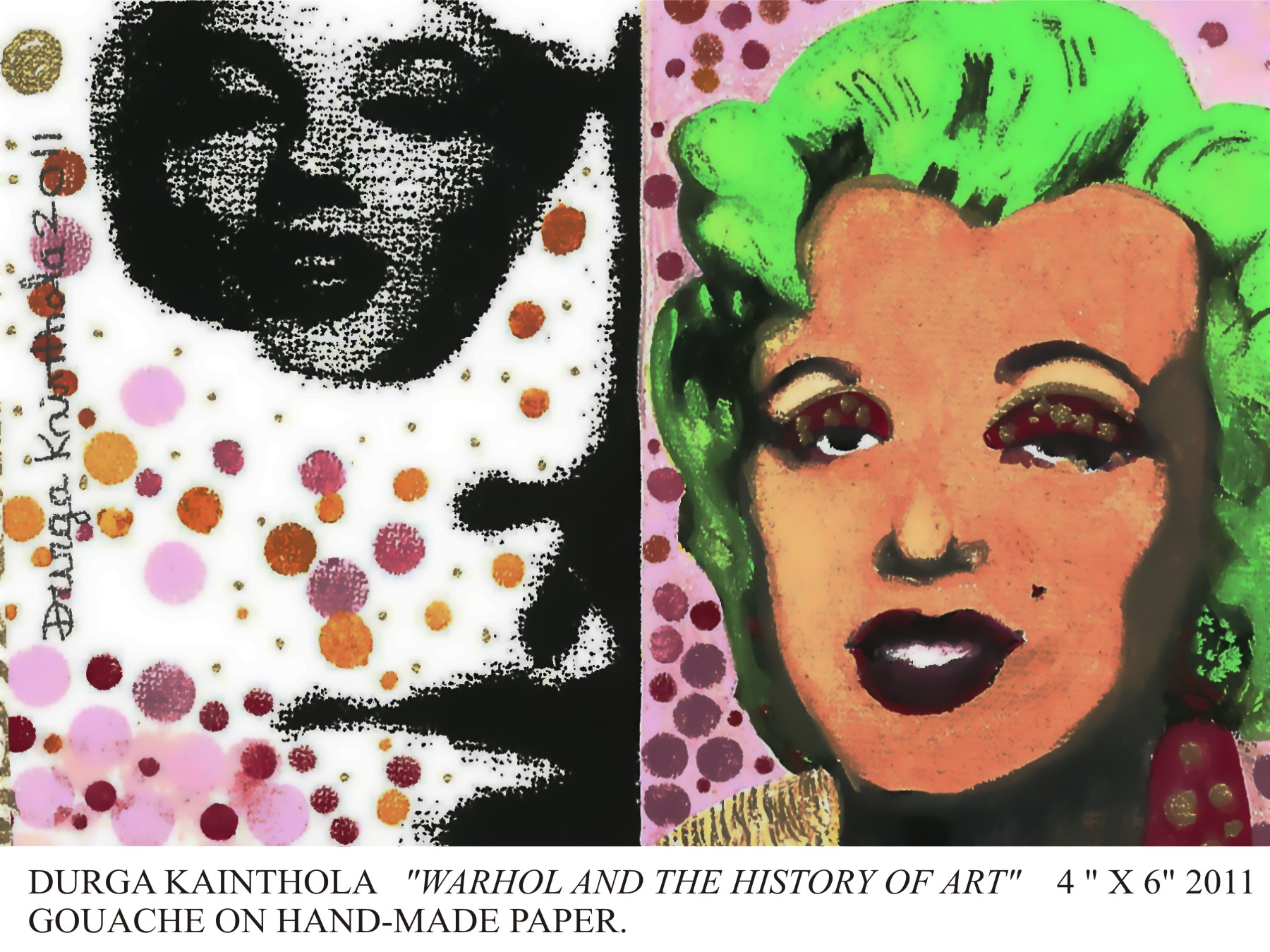 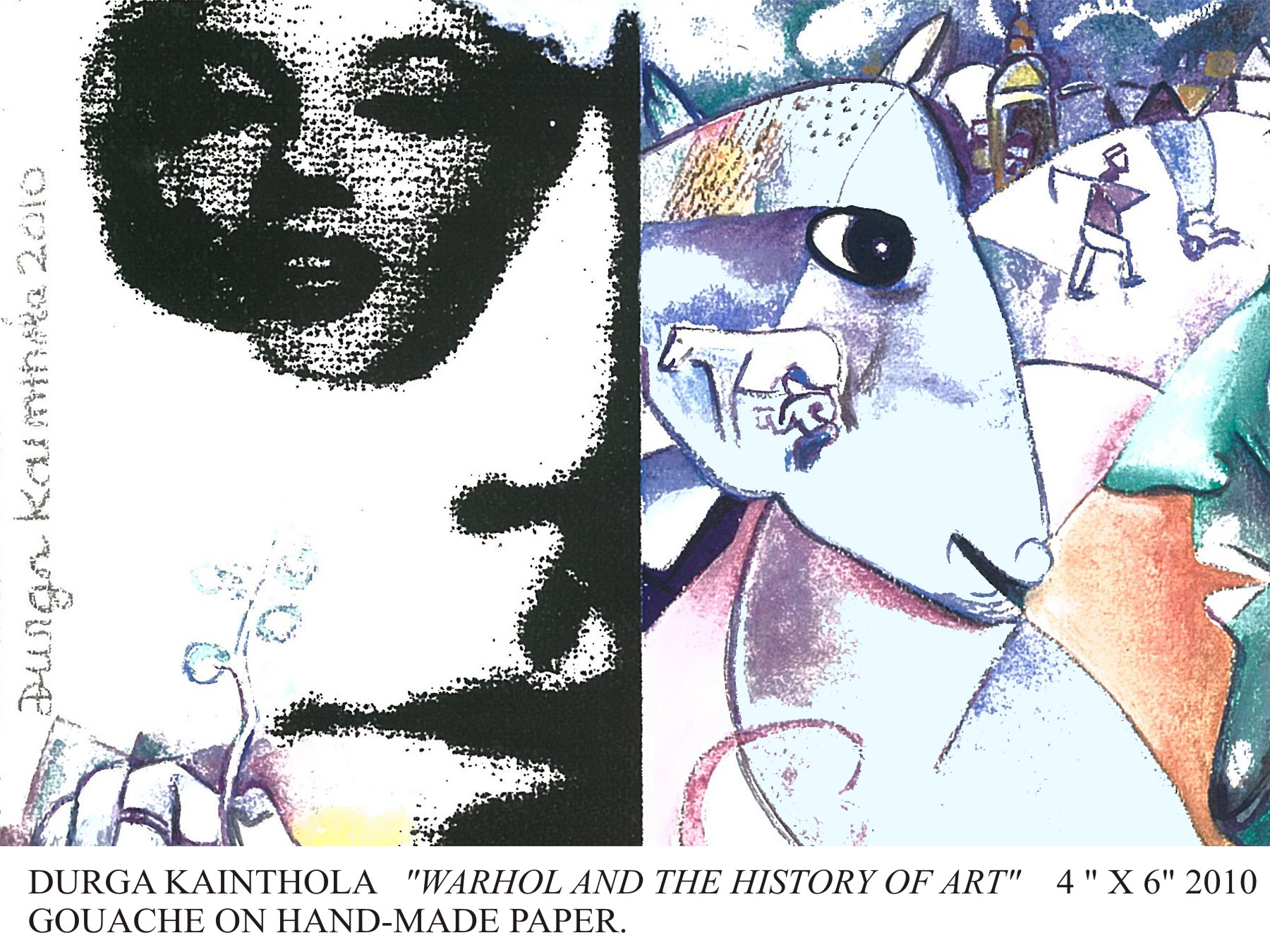 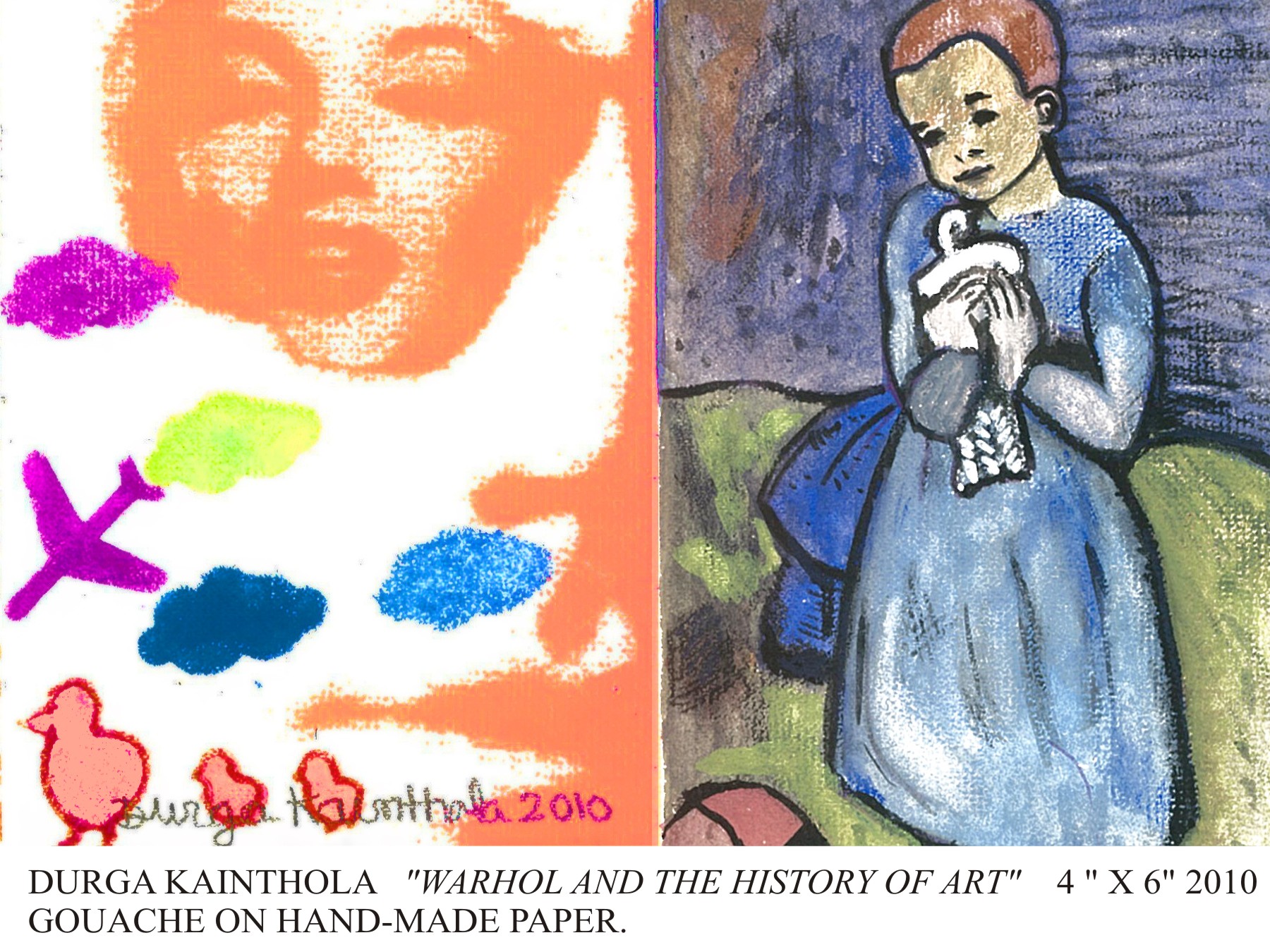 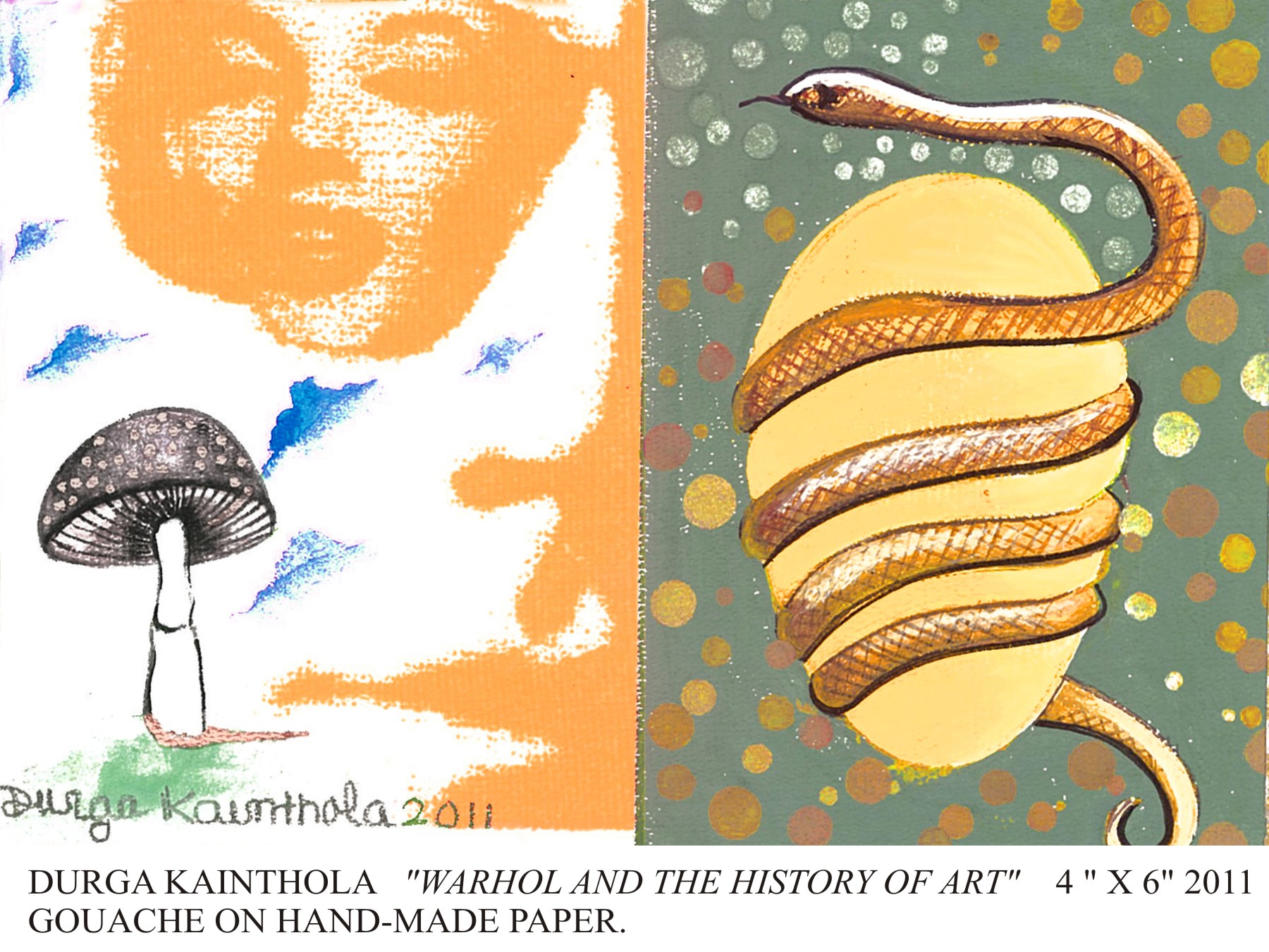 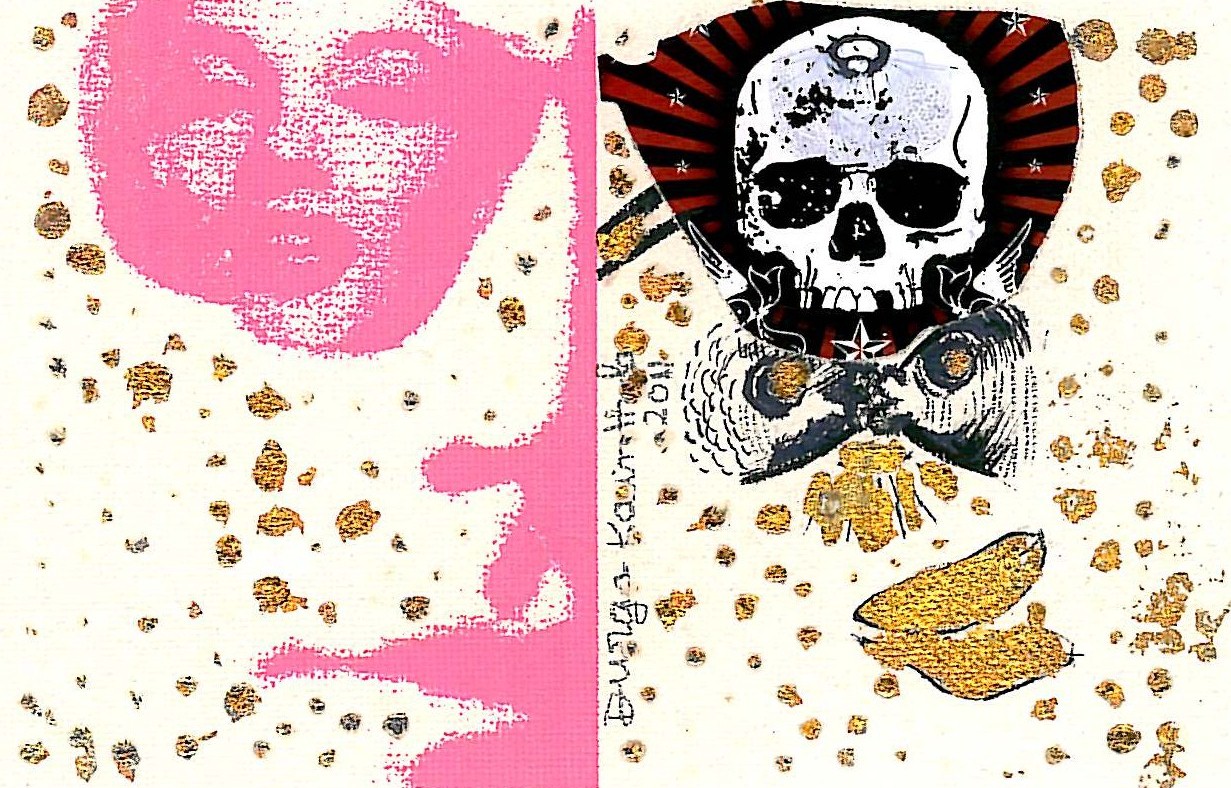 Warhol and the history of Art,2011,4×6 inches,gouache on paper 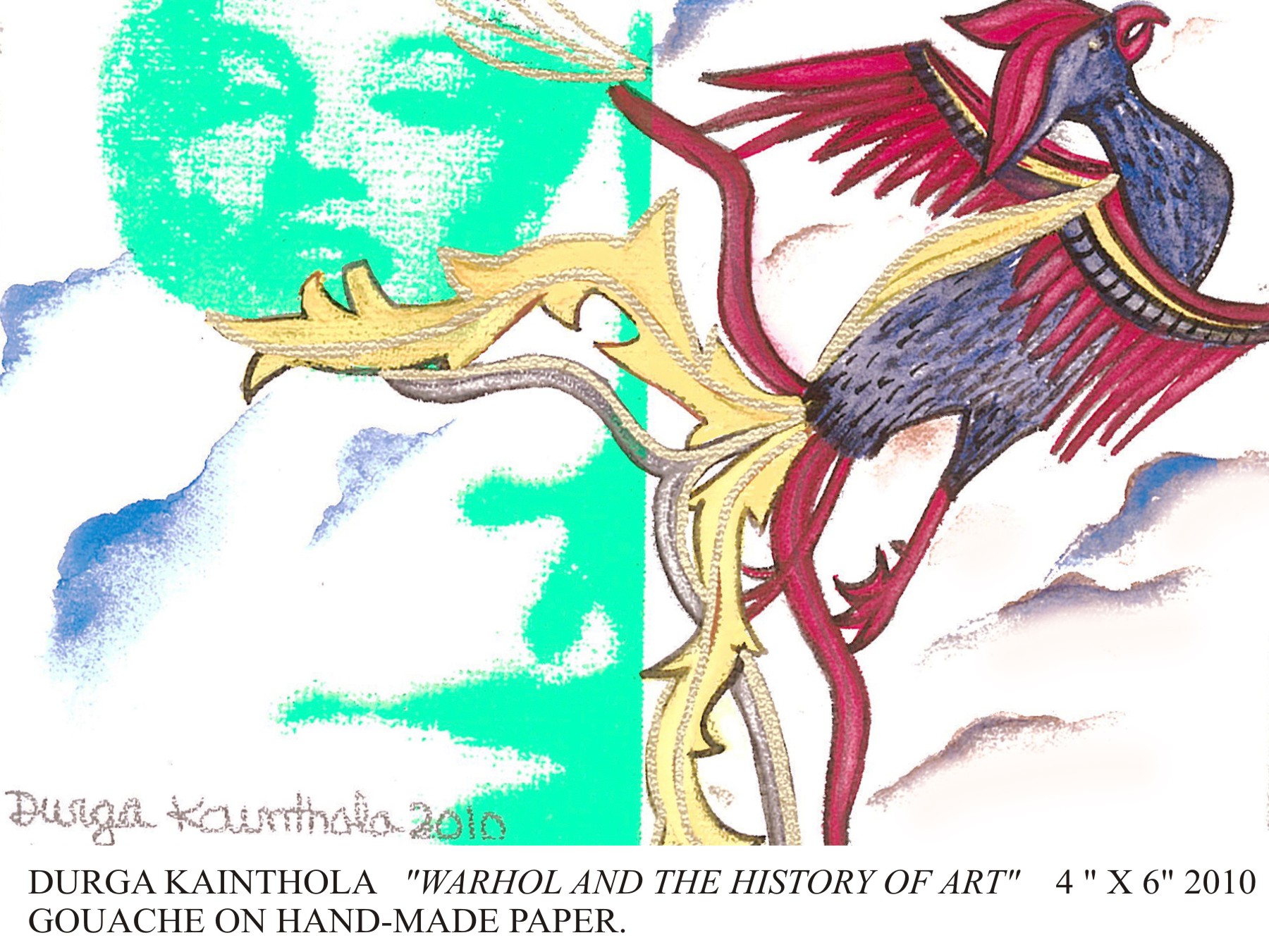 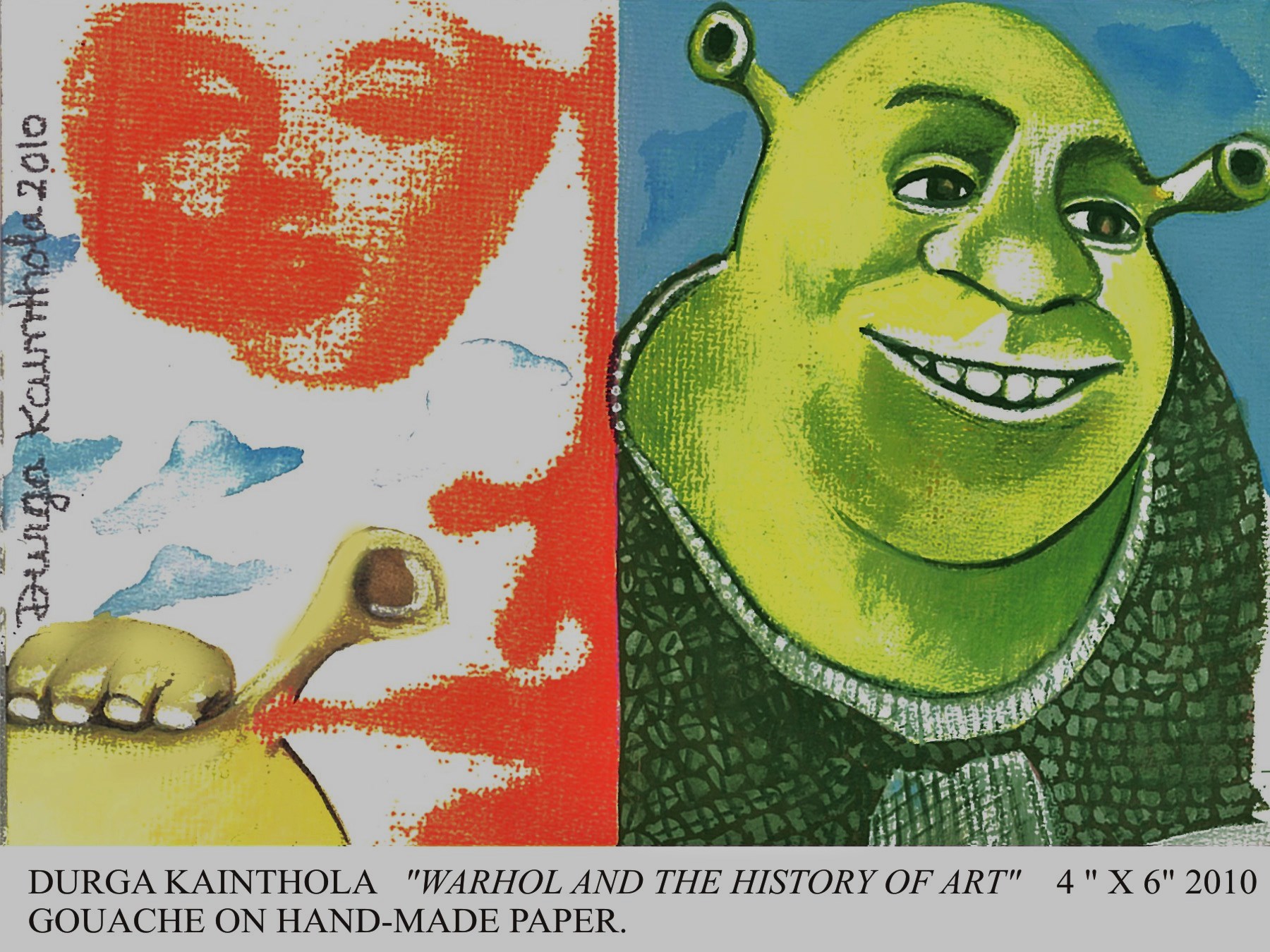 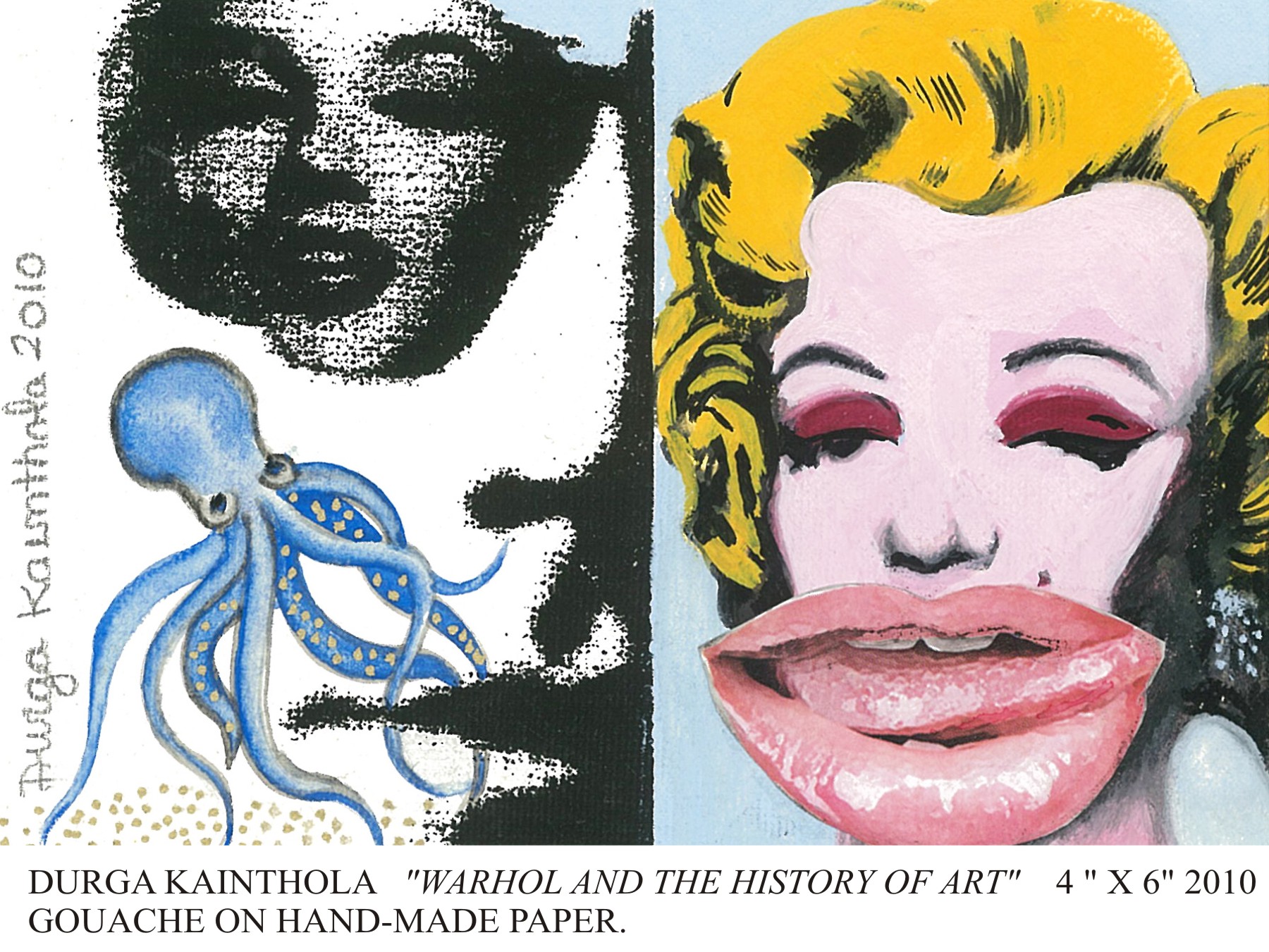 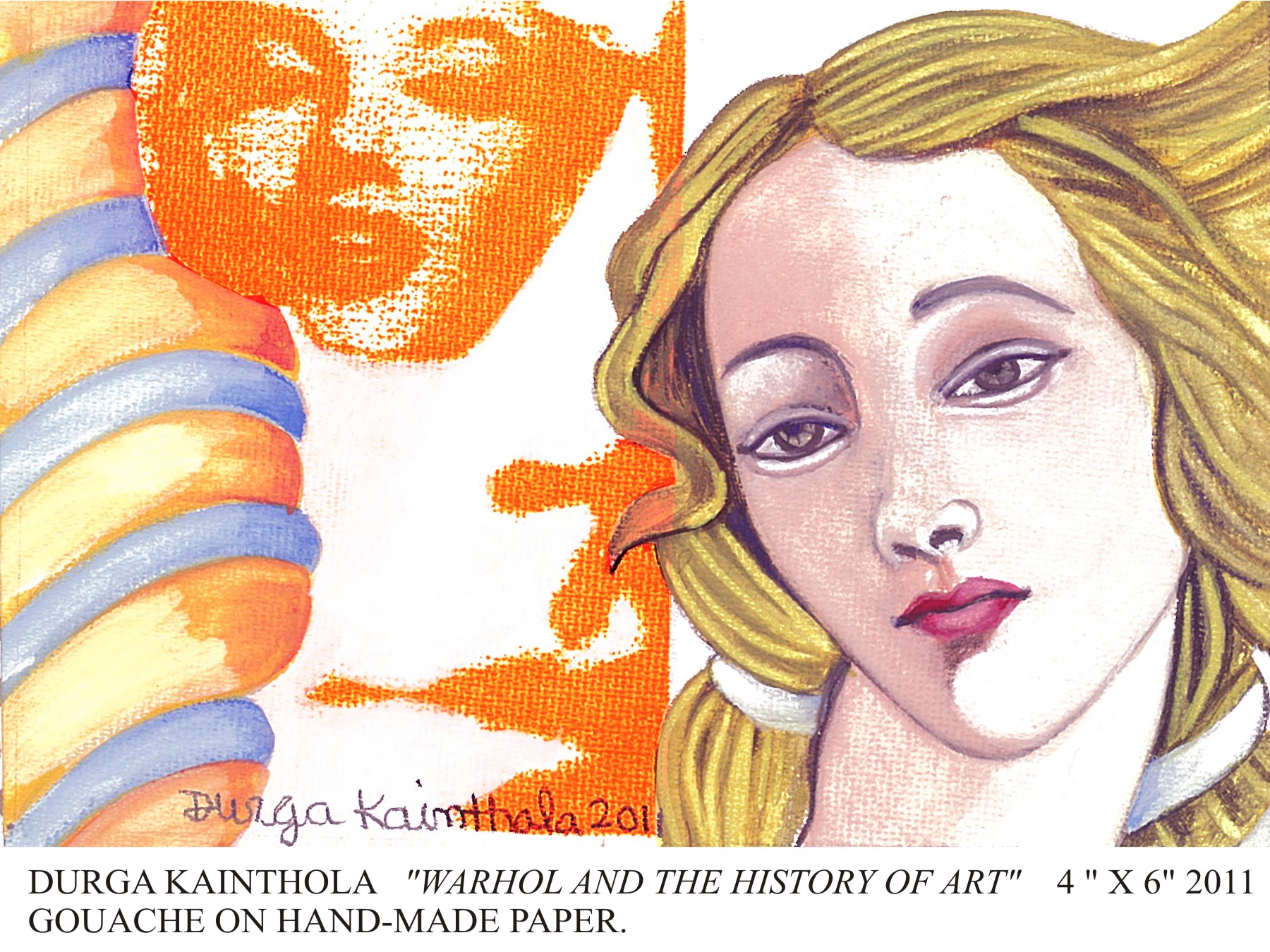 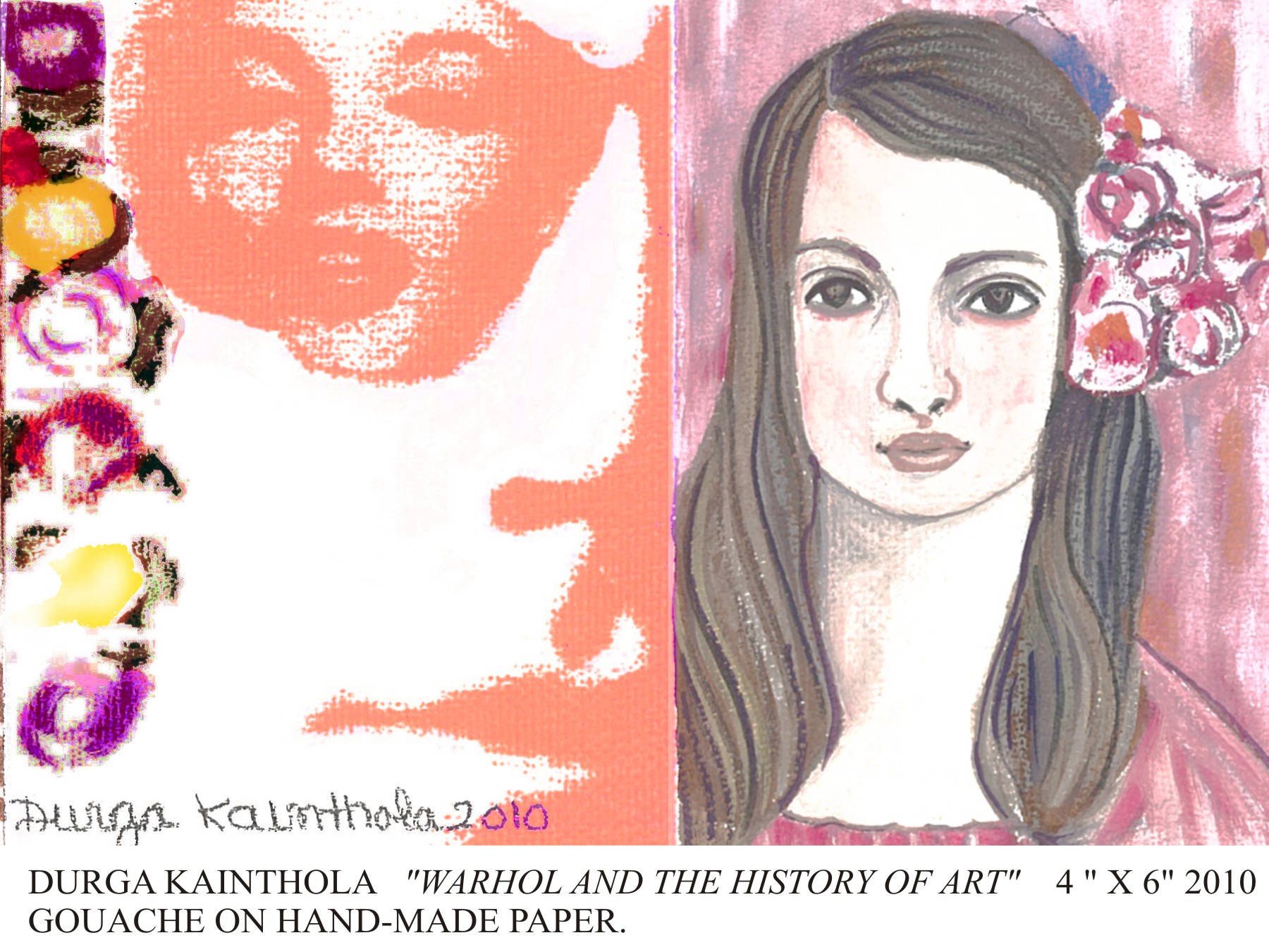 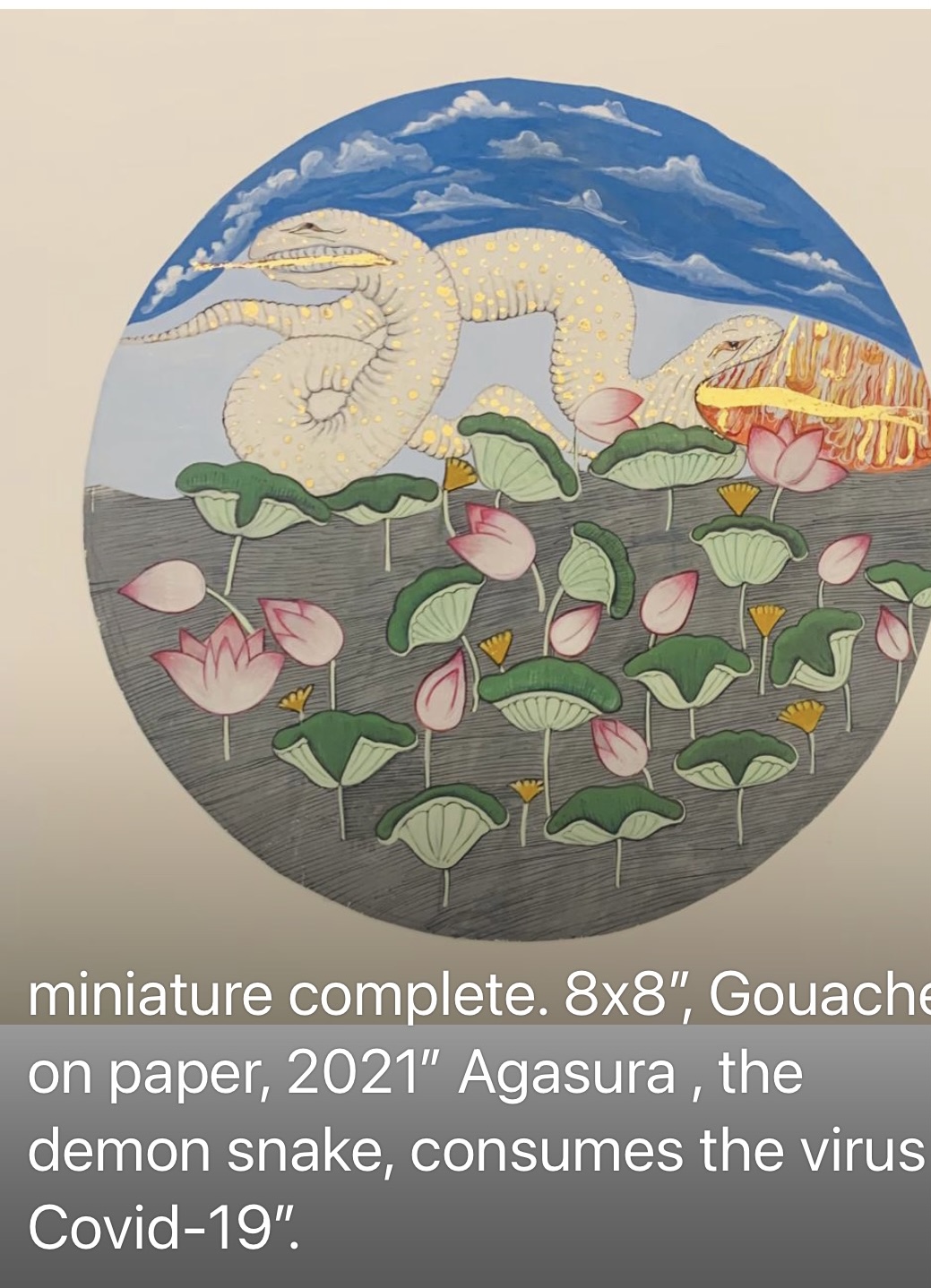 Warhol and the History of Art

Warhol and the History of Art, Durra kainthola’s recent works on paper conjoin past and present, East and West, in a fusion of contemporary imagery and ancient mythology. Marilyn Monroe addresses the viewer through Warhol’s lenses. As Monroe’s face was splashed in fuchsia tints across Warhol’s silkscreen art for ‘eternity’ related across this iconic subtext, famed paintings from art history come refreshingly alive.

Against such a panoramic black-and-white backdrop, vibrantly colored metaphors re-narrate the visions of Byzantine, the old masters, the impressionist, the cubist, the surrealist, classical Indian paintings, and mughal miniatures. Drawings from the caves of Lascaux to Dali’s persistence of memory, from the chairs and still lives of Van Gogh to the long-necked women of Modigliani.

These digitally generated prints of Warhol’s face are dramatically transformed by the artist’s deployment of myriad hues and tonalities. As she paints over the image, beside it and around it…defying the boundaries. On the pictorial plane, Kainthola depicts lyrical metaphors, interwoven and uncovered by the mind’s eye. Seduced, the viewer enters a world of traditional and modern vocabularies.

By juxtaposing global visual images, the text of art history is no longer limited nor trivialized. The viewer is asked to perceive multi-fold meanings as the eye moves from one work to the next. Unwittingly and with an unexpected twist of irony these works also question: Who is the icon? The image; its maker; or both or neither. Timeless, beyond continental boundaries, affirmative of fusion. A global lexicon of metaphor and aesthetics, celebrates the vitality and essence of art and its never-ending rebirth.